The basis of fairy tales is in reality.
The basis of reality is fairy tales.
The first horror film produced by the tag-team of Milton Subotsky and
Max Rosenberg (the two men responsible for Amicus Productions, Hammer’s
only serious rival in the field of British horror in the 1960s and
early ‘70s), City of the Dead is an understated and unsettling movie
about witches and the academic study of witchcraft in contemporary New
England. Making striking use of black-and-white photography (see image
above) and of quasi-Lovecraftian iconography, the film has an
insinuating force all its own. A wonderful sister-text to Witchfinder
General (1968), City of the Dead is not to be missed.
Thursday, November 18th
Stevenson 150, 9 PM
Posted by ECW at 12:28 PM 6 comments: 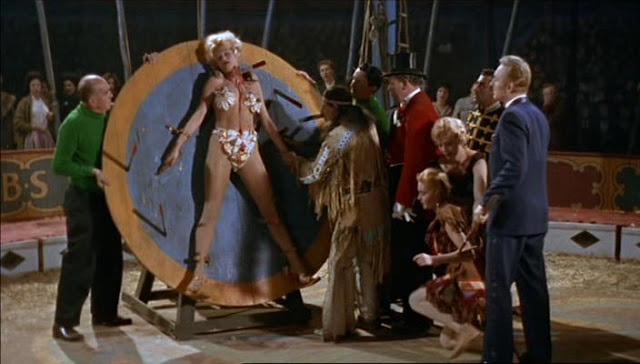 Quick, get her to a doctor. And send the clowns in.
A manic little film that was part of that cycle of rough-stuff horror shows (along with Peeping Tom [1960]) that the British Board of Film Censors let pass through from 1959 to 1960, much to their subsequent chagrin. The plot of the film is wonderfully delirious: fleeing the British authorities after a surgery goes criminally wrong, the plastic surgeon Dr. Schuler (Anton Diffring) ends up on the continent where he decides the best thing for him to do at this point (obviously) is to take over a struggling circus and fill it with disfigured female criminals whom he has “made beautiful” and whom he makes wear skimpy clothing. Scotland Yard and other police organizations start to wonder what’s going on with this circus, however, after many of its star attractions end up dying very public and seemingly accidental deaths (see the image above for one such “accident”). Everything starts to come to a head once Schuler’s circus arrives in the UK for what he hopes will be his triumphant return into the world of plastic surgery once everyone sees what his techniques can do to disfigured bodies and faces. Things don’t quite turn out as he had planned or hoped they would. A wonderful film about the horror of petty professional resentments and jealousies, Circus of Horrors is not to be missed.
Thursday, October 28th
Stevenson 150, 9 PM
Posted by ECW at 10:23 PM 1 comment:

One of the cold cheekier heights of Brit Horror poster design.
(And a fitting emblem for the later turn, in which the blood is leeched out, when the cleavage is fundamentally interchangeable, and what remains are the faded bubblegum coverings - like Eastmancolor left in the sun for too long - standing in for the scars which can no longer be noticed on their own, in this dull and thud of faithless seriality.  The bandage becomes the thing to come to see.

And it is this fact that makes these Band Aid films, which fantasize that there's red life left to hold within, all the better.)
Posted by ECW at 11:13 AM No comments:

British Horror Film Presents: The Fearless Vampire Killers or: Pardon Me, but Your Teeth Are in My Neck (1967) 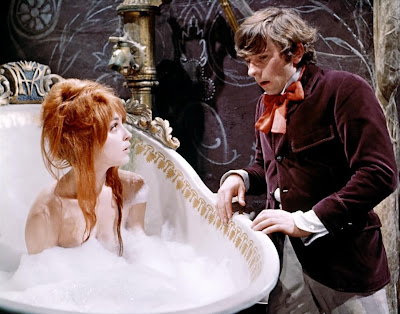 Takes me for a nincompoop,
that necrophile.
A remarkable (and remarkably downcast) pastiche of Hammer horror films (particularly their cycle of vampire films, of which four had been made by 1967) by a director (Roman Polanski) notorious for his vertiginous shifts from high to low art, often from film-to-film but not always, as this cheeky take on Hammer demonstrates by getting more and more solemn as its inanities unfold. A strange counterpoint to Polanski’s decidedly more art-house-ready horror flick, Repulsion (1965), which we’ll be viewing in two weeks, Fearless Vampire Killers is not to be missed. Come for the Jewish Vampire laughing off a crucifix (“Oy vey, have you got the wrong vampire!”), stay for the end of the world.
Thursday, October 21st
Stevenson 150, 9 PM
Posted by ECW at 4:07 PM No comments:

The meek shall NOT inherit the earth. They can't be trusted with it.
Corbeck
Hammer's 1971 Blood from the Mummy's Tomb is a film of pere-version, in which the usual savant v. monster dynamic is a true family affair - between the Egyptologist father (originally to be played by Peter Cushing, then played by Andrew Keir) and the doubled figure of Tera, 'evil' Egyptian princess stashed in his basement, and her reincarnation: his daughter (!) Magaret Fuchs (both played by Valerie Leon). The stars are correctly aligned in true Lovecraftian fashion and Tera is ready to return in her 'vessel' of Margaret and begin her reign... 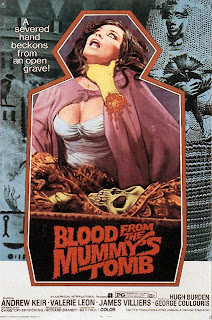 Set in its own present, the film layers the late 19th/early 20thC misogyny of its sources - Stoker's The Jewel of the Seven Stars and Rider Haggard's She - with late 60s/early 70s misogyny vectored through 'sexual liberation' - folding together two moments of confrontation between a disturbed imperial masculinity/patriarchy with radicalised feminism. As Valerie Leon noted her role consists mainly in displaying as much cleavage as possible, but the fact that her father has 'awakened' her into the role of Tera suggests something more like the Fritzl basement underpins the libidinal dynamics. 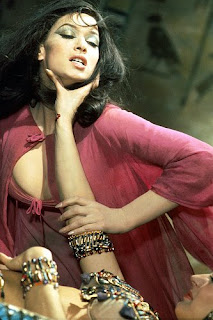 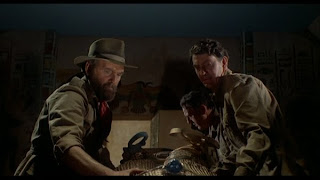 While the savant-father, and his various colleagues on the expedition, seem to belong firmly to the Edwardian, the exception is Corbeck (played by James Villiers). Camply seductive counter-figure of the perverse father, he 'seduces' Margaret into becoming what she is, as he regards Tera not as evil, but as a female unbermensch 'beyond good and evil'. A very British Charlie Manson, Corbeck channels Nietzsche in his desire to escape the shackles of bourgeois morality.

Tera/Margaret sees herself as the reincarnation of love, all suggesting the 'evil' of hippie amoralism threatening to return from the cosmic Egyptian past in a 'new age' apocalypse of wanton libido, not confined to a father waiting until his daughter is 21 before he is able to become her servant (Margret already has a de rigeur 'cool' 60s boyfriend, who 'Tera' offs in his sports car with a useful tree ram).

Margaret / Tera refers to the collection of the various (crappy) tomb-objects required for her reincarnation as 'going shopping' - a deadly male fantasy of female consumption ('I'm going to kill you'). Of course, in the final ritual for the bringing to earth of Tera's age of cosmic love/evil father and daughter ally to kill Tera. This literally brings the house / basement down. The final scene has Margaret as the mummy - not Egyptian but the biopolitical 'mummy' of bare life, the bound figure of feminine jouissance. As a nurse helpfully explains, she has no name because she has no family and all the others were crushed in the collapse.

Beyond the paternal function, at least in the imagination of Hammer, lies not the libidinal terror of the antinomian promise of 'liberation' but the new shackles of the life drive as inexpressible horror of bound libido. 1970s film would play again and again with the topos of rape as discipline. Here the binding is literalised, as the 'mummy' (and the mother's death in Margaret's moment of birth was the condition of her binding to the father), against the threat of some 'naming' and libido not propped on the father. 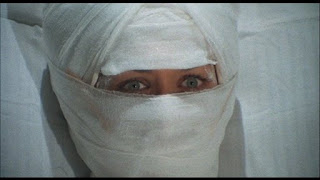 Posted by Benjamin at 8:28 AM No comments:

As promised, an empty post to allow for comments on the films from Tuesday, if anyone wants to discuss Curse, Revenge, or why there's always one brain too few and one body too many.
Posted by ECW at 11:47 AM No comments:

At S A/O B, notes from ECW on Dead of Night, the dangers of common symptoms, excusing yourself from a party, and psychoanalysis soft and hard.
Posted by ECW at 11:29 AM No comments: